Chain of Responsibility Law: Updates You Need To Know About

Chain of Responsibility Law: Updates You Need To Know About 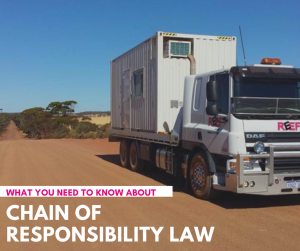 If your business involves any sort of distribution or freight, then you’ll no doubt have been keeping up with the latest news on updates to the Chain of Responsibility (CoR) laws. Proposed by the National Heavy Vehicle Regulator (NHVR), the laws aim to improve truck safety in Australia. Although there were already state laws which held company bosses responsible when truck accidents occurred, a series of high-profile accidents brought truck safety into the headlines, putting pressure on the regulator to clarify and further enforce these laws. Here’s a guide to the CoR laws, changes that are proposed, and how they might affect your business.

Why the laws are being updated

A series of high-profile truck accidents hit the headlines in late 2013 and into 2014, including the Mona Vale crash in Sydney which killed two people. Caused when a fuel tanker flipped and burst into flames, the driver of the crash was found guilty of negligence due to his dangerous driving but managed to avoid jail. A report from 2014 showed that although accidents like this were often prosecuted, the sentences and fines weren’t enough of a motivator for trucking companies to improve their safety and that responsibility also needed to be placed on those higher up the supply chain.

Another issue with truck safety is that the number of vehicles on the road is increasing, and by 2031 is set to double to 794 million tonnes on the road. Without stricter regulation, this could mean a greater number of accidents. Statistically, driving a heavy vehicle is one of the most dangerous jobs in Australia, which is why these changes are so important.

Changes to the CoR laws will be made by the National Heavy Vehicle Regulator, an independent regulator for the industry. Anyone who drives a vehicle over 4.5 tonnes will be accountable to the NHVR and their guidelines, so if you hire a transport company in Perth which uses heavy vehicles, then they’ll be bound by their regulations such as work and rest requirements.

The trucking industry has long suffered from a high-pressure culture, where some bosses have found ways around working time regulations, and where fatigued or ill truckers are pressurised to work even when it’s unsafe. The NHVR has always looked to change this culture and reduce accidents in the industry.

Who are the CoR updates aimed at?

While CoR makes all parties responsible for safety, the update mostly focuses on off-road parties who may be pressuring drivers to act unsafely, or otherwise doing things that could contribute to an accident.

Some of the things the CoR update includes:

Who will be accountable under the updates?

Anyone who works in transportation could potentially be affected by the CoR update, so as an example, some of the people who could fall foul of regulations include:

As the name suggests, the Chain of Responsibility will be anyone who is involved in transport needs to take responsibility for their role and staying compliant. For example, if you’re organising machinery transport in Perth, and try to save time by overloading a truck, then both you and your company can face prosecution for safety breaches.  These updates are designed to prevent people putting pressure on drivers to do unsafe things and therefore change the pressurised culture in trucking.

How will breaches be identified?

The NHVR is taking measures to make it easier to identify breaches and will be investing in training new investigators, gathering intelligence, and working closely with drivers to identify safety concerns. They are running training sessions across the country, with a focus on educating those in the supply chain on their part in the CoR.

What are the consequences of breaching CoR?

With tougher penalties coming in to place, it’s important that individuals and corporations know the consequences of breaching the guidelines. The penalty will depend on the level of the breach, whether it’s deemed to be a breach of duty, putting people at risk of injury or death, or complete recklessness, but the fines will run up to $3 million fines for corporations, or 5 years of imprisonment for individuals.

How can I prepare for the changes?

The CoR update officially comes into play in July 2018, and this gives companies time to ensure they are compliant. The National Heavy Vehicle Regulator has lots of information about the Chain of Responsibility update on their site, so it’s worth checking to see the latest on the changes. If you deal with any part of the transport process, then you may want to consider measures such as:

It’s a good idea to start implementing changes now, so that staff have time to get used to them, and this will make them part of your company’s everyday routine.

Changes to the Chain of Responsibility will affect people at all levels, and safety won’t just be the responsibility of the driver. With those who drive trucks often under a lot of pressure to break regulations, the CoR update aims to sanction those who cause these pressures, whether it’s from letting safety slide or deliberately breaking rules to increase profits. Therefore, it’s important to know what your duties are, and to raise any concerns to your manager or the regulator, as both individuals and corporations will be affected by the changes. By ensuring staff are trained properly and you know your responsibilities, you can ensure you stay compliant of the changes.